If you like SKIING, SNOWBOARDING and all things APRÈS, then Frozen Underground is made just for you.
All our Artworks are based around the greatest mythical subway ever: a tube system that joins up
all your favourite winter resorts.

Explore the world of Frozen Underground: the only way to snow.

THE STORY OF THE LEGENDARY FROZEN UNDERGROUND

The Tunnels are Discovered

Wherever there are mountains, it seems, there are tunnels running underneath them. Intensive studies have revealed that some of the largest subterranean routes were originally created several thousand years ago by the early Yetis in order to make their journeys across mountainous terrain much easier.

For reasons yet unknown, it appears as though the tunnels became abandoned and seemingly forgotten somewhere between 2000 BFU (Before Frozen Underground) and 2200 BFU.

Their rediscovery started in the summer of 1567 in the quiet lane of Pulverturmweg in the north of Kitzbühel. On 7 July, engineers were digging foundations for the first Hahnenkamm ski lift. It was to be driven by a rudimentary steam turbine (described by Taqi al-Din in 1551) and needed some serious foundations. Without warning, the base of the hole collapsed, and it was clear they had broken through into some kind of cavern underneath. A search party was sent down and they found a tunnel which led upwards at a steep angle towards the north-east. It eventually emerged underneath a hütte on Waldhofweg owned by Anton “Gefahr” Lebkuchen.

Anton suggested to the engineers from the Kitzbühel Gemeinde that they could work together, and that his hütte could be the entrance of a subway system taking guests down via “trains” to the newly installed Hahnenkamm steam-driven rope lift. As well as developing this line, Anton set to work researching the surrounding area and, finding tunnels everywhere, realised the potential of taking people skiing to other distant places: The Frozen Underground was born.

Back in Kitzbühel, less than six months later, the first ever Frozen Underground line was opened on 2 January 1568. Then, the wooden carts of the Lebkuchen Line, driven by gravity alone and working (not surprisingly) just one way, took winter sports enthusiasts from Kitzbühel North to Kitzbühel North-West, through just 40 metres of tunnel. 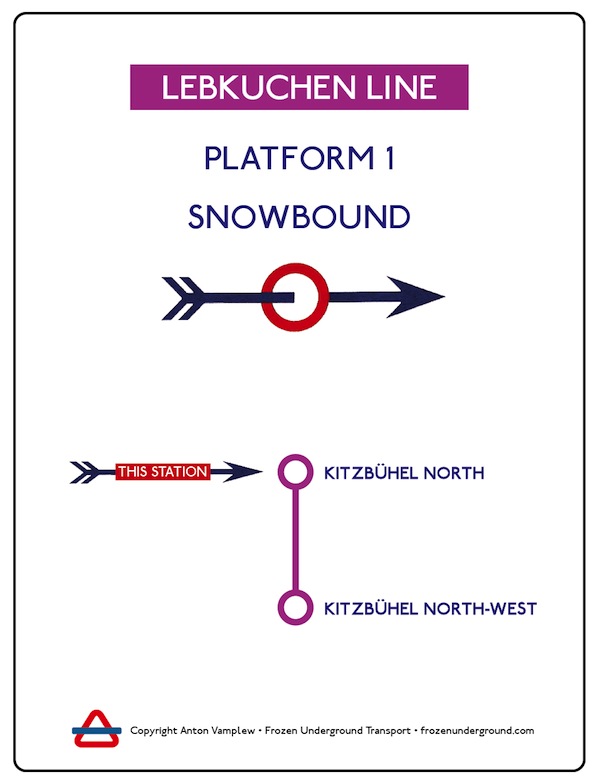 The station sign at Kitzbühel North.
But what an experience, as the line dropped at an angle of 48 degrees! The buffers at the destination were well prepared snow-bags, but needless to say the arrival was always fairly thrilling. The only written comment on file from a passenger dates from March 1572. Upon his arrival he remarked: ‘Shiver mi timbers, mi ski pants are damp!”

The trains ran for more than 100 years until 1672, when the expansion of the ski area with many more ski lifts made the line redundant.

More recent excavations at Kitzbühel North-West have since revealed a very impressive first aid station and a bar, as well as the bottom station of the also disused Hahnenkamm rope lift.

Tours of the Lebkuchen Line can be arranged at: www.frozenunderground.com

Pre-Discovery and the Yeti